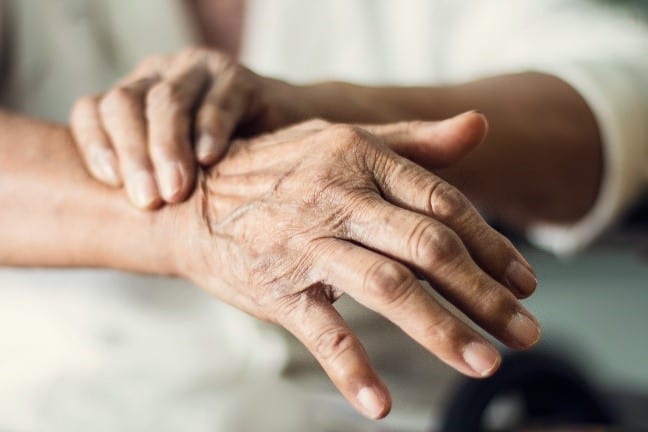 According to the American Society of Consultant Pharmacists, the five most chronic diseases afflicting the elderly are adult onset diabetes, arthritis, kidney/bladder problems, dementia and Parkinson’s disease. Though we are all familiar with many of the warning signs of the top four diseases, Parkinson’s, in many cases, remains a mystery. What are the symptoms and what warning signs should you be watching for?
Broken down to its simplest description, Parkinson’s is a degenerative (meaning progressive deterioration/decline) of the central nervous system (CNS) which includes the brain and spinal cord. It affects dopamine-producing neurons (meaning: the chemicals -dopamine- that are responsible for sending signals between nerve cells – neurons). In Parkinson’s, the cells producing the dopamine begin to die which lowers dopamine levels which makes sending signals between the neurons less productive, which in turn results in movement disorders associated with Parkinson’s. And even simpler definition: low dopamine production means the neurons can’t send clear messages, so the muscles don’t know what to do.
That is a very pedestrian explanation of a very complicated disease process that has many different forms with varied presentations. What is important for us as aging individuals or loved ones of aging individuals, is to understand and remain vigilant to the early warning signs of Parkinson’s. With early detection, there are medications and therapies that can help slow the progression of this disease.
The early signs of Parkinson’s can mimic conditions that are perfectly normal or have fewer troubling causes. If you notice these signs on a more persistent basis, you’ll want to have a conversation with your doctor.
Tremor: this can be as slight as a little shaking in your finger. Shaking after exercise, stress or if you are injured is normal. Medications can sometimes cause shaking also.
Small Handwriting: a change in your handwriting may be a sign, especially if you start to write smaller than you have in the past or if you begin writing in a much more cramped style. As we age and get stiff fingers and poor vision, it is normal for our handwriting to change somewhat.
Loss of Smell: a change in your sense of smell such as not being able to smell pickles or licorice. It is normal though to have an altered sense of smell if you have a cold, the flu or allergies that cause a stuffy nose.
Trouble Sleeping: if you always slept well but now thrash around in bed or act out when dreaming. If you or your spouse begin noticing that you are jerking in your sleep.  It is normal for everyone to have a ‘bad night’ when they toss and turn, or you may have periodically had sudden jerks as you fall asleep.
Trouble Moving or Walking: stiffness in your body, arms or legs that does not go away as you move.  Stiffness or pain in your shoulders or if you notice that you don’t swing your arms as you used to when you walk. Arthritis or injury might explain these symptoms too.
Constipation: every day struggling to move your bowels could be an early sign of Parkinson’s. It is normal though for constipation to happen if you don’t have enough water or fiber in your diet, and there are many medications that can also make it difficult to go.
Soft Speaking: a change to very soft or hoarse sounding voice can be a sign of Parkinson’s. Have people told you to speak up lately? It may not be that they are hard of hearing, it may be that you are speaking softly. It is normal for your voice to sound different if you have a cold or other virus, but you will usually revert back to your usual sound as you get better.
Masked Face: if you or your loved ones notice that your facial expressions are lost, it may be a sign of Parkinson’s. Often this is misinterpreted as you are being serious, depressed or mad. If you are in a bad mood, this is normal, if not, it could be a side effect of medication.
Dizziness or Fainting: if you get dizzy when you change positions quickly it could be a sign of low blood pressure which, in turn, can be a sign of Parkinson’s. However, it’s completely normal for you to get a little dizzy from standing up too quickly occasionally.
Stooping or Hunching Over: if the ramrod straight posture you’ve had your whole life is changing and your stooping, leaning or slouching when you stand, this could be a sign of Parkinson’s. Injury, illness or another bone disease could be responsible as well.